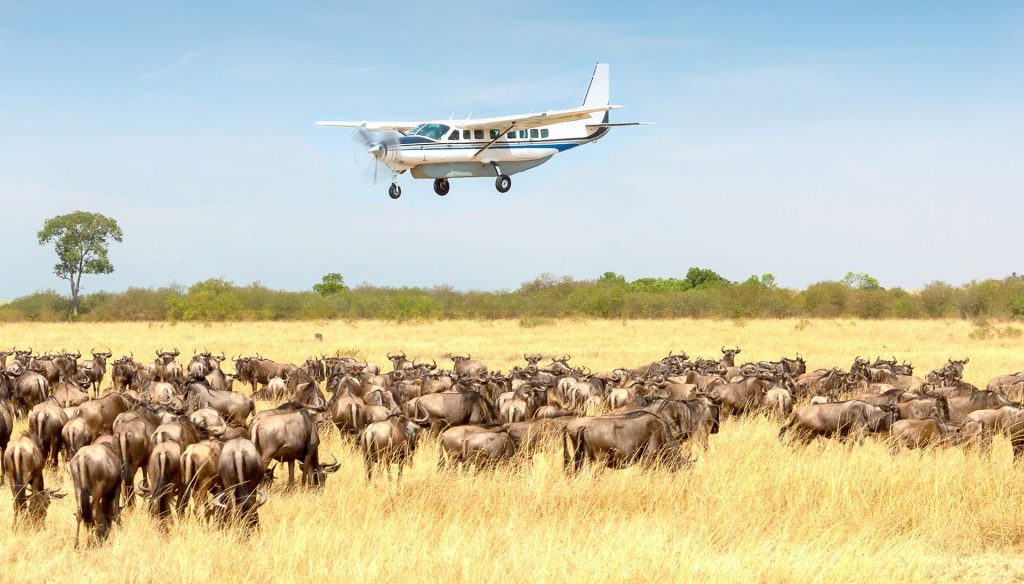 Tanzania Exclusive Journeys Safari Holidays and Travel Package is specifically designed to focus on and to increase your chance to see the great Serengeti wildebeest migration. The Serengeti areas in Tanzania are the best locations for the months of July to witness thousands of wildebeest spread across the plains grazing on the rich short grass plains. Predator action is at its peak with great sightings of cheetah, lion, hyena and leopard and a very good chance to see adrenaline packed kills.

Arrive at Kilimanjaro international airport meet and transfer to the Hotel in Arusha for the late night sleep, hotel for overnight.

Arusha is a city in northern Tanzania and the capital of the Arusha Region, with a population of 416,442 plus 323,198 in the surrounding Arusha District Located below Mount Meru on the eastern edge of the eastern branch of the Great Rift Valley, Arusha has a temperate climate. The city is close to the Serengeti National Park, the Ngorongoro Conservation Area, Lake Manyara National Park, Olduvai Gorge, Tarangire National Park, Mount Kilimanjaro, and Arusha National Park on Mount Meru.

In the morning transfer to Arusha airport for a flight to Tarangire. Arrive in the park of Tarangire and then have a full day game drive until the evening, then drive back to the lodge.

The park Located slightly off the main safari route, Tarangire National Park is a lovely quiet park in Northern Tanzania that is most famous for its elephant migration, birding, and quite an authentic safari atmosphere. The majority of travelers to the region either miss out Tarangire altogether or venture into the park for a matter of hours leaving parts of Tarangire virtually untouched.

Depart Arusha after breakfast and then drive to Tarangire National Park. Have a morning walking safari with an armed ranger, and in the afternoon, you will have a game drive in the park. In the evening, drive back to the lodge.

After breakfast, drive to Tarangire National Park for game viewing. For the evening game drive in the park, herds of up to 300 elephants scratch the dry river bed for underground streams. It’s the greatest concentration of wildlife outside the Serengeti ecosystem – a smorgasbord for predators – and the one place in Tanzania where dry-country antelope such as the stately fringe-eared oryx and peculiar long-necked gerenuk are regularly observed.

After breakfast, depart from Kuro airstrip to Serengeti National park, and then drive to central Serengeti for a full day game drive in the park. In the evening, you will go back to the camp/lodge for dinner and overnight.

Tanzania’s oldest and most popular national park, also a world heritage site and recently proclaimed a 7th worldwide wonder, the Serengeti is famed for its annual migration, where about six million hooves pound the open plains, as more than 200,000 zebra and 300,000 Thomson’s gazelle join the wildebeest’s trek for fresh grazing. Yet even when the migration is quiet, the Serengeti offers arguably the most scintillating game-viewing in Africa: great herds of buffalo, smaller groups of elephant and giraffe, and thousands upon thousands of eland, topi, kongoni, impala and Grant’s gazelle.

Have breakfast at the lodge then hop on a full day game drive in the Serengeti National park. Try to follow and view the great migration, and late afternoon drive back to the lodge/tented camp.

Serengeti National Park: The park is well known for its healthy stock of other resident wildlife, particularly the “big five”, named for the five most prized trophies taken by hunters: Lion: the Serengeti is believed to hold the largest population of lions in Africa due in part to the abundance of prey species. More than 3,000 lions live in this ecosystem. African Leopard: these reclusive predators are commonly seen in the Seronera region but are present throughout the national park with the population at around 1,000. African Elephant.

Have breakfast at the lodge then hop on a full day game drive viewing. In the late afternoon, drive to Serengeti central (Seronera).

A million wildebeest… each one driven by the same ancient rhythm, fulfilling its instinctive role in the inescapable cycle of life: a frenzied three-week bout of territorial conquests and mating; survival of the fittest as 40km (25 mile) long columns plunge through crocodile-infested waters on the annual exodus north; replenishing the species in a brief population explosion that produces more than 8,000 calves daily before the 1,000 km (600 miles) pilgrimage begins again.

After breakfast, you will have a game drive in the Serengeti to the Seronera Airstrip for your flight to Lake Manyara. You will arrive in the afternoon for lunch. Then have an evening game drive and then drive back to the lodge for the dinner and overnight.

Manyara provides the perfect introduction to Tanzania’s birdlife. More than 400 species have been recorded, and even a first-time visitor to Africa might reasonably expect to observe 100 of these in one day. Inland of the floodplain, a narrow belt of acacia woodland is the favored haunt of Manyara’s legendary tree-climbing lions and impressively tusked elephants.

After breakfast, have a morning game drive to Ngorongoro for a full day crater tour.

The jewel in Ngorongoro’s crown is a deep, volcanic crater, the largest unflooded and unbroken caldera in the world. About 20kms across, 600 meters deep and 300 sq km in area, the Ngorongoro Crater is a breathtaking natural wonder. We will visit Lake Magadi, a large but shallow alkaline lake in the southwestern corner, which is one of the main features of the crater. A large number of flamingos, hippos and other water birds can usually be seen here.

Meals: B, L, D
Accommodation: The Highlands of Ngorongoro

Have breakfast at the lodge/camp in the morning then go to a crater rim walk. In the afternoon, drive to Manyara airstrip for a flight either back to Arusha/Kilimanjaro International Airport or fly to Zanzibar.

Ngorongoro Crater Rim walk is a very good way to get out of the car without committing to a serious walking or trekking after several days of wildlife viewing. It allows you to see tracks and signs and have the feeling of isolation that comes from trekking in the African Bush. An expert guide and armed ranger will accompany you during the walk to protect you from dangerous wildlife. To start your Ngorongoro Crater Rim hike you will drive to the starting point. The walk follows the Western rim of the Crater past the spectacular Oloirobi viewpoint. There are patches of forest, to begin with, and later it opens up into grassland. There are spectacular views down into the Crater on your right as you walk and then some more great views emerge to your left towards Olduvai Gorge, the Serengeti, and the Gol mountains. This is an easy walk with no steep climbs, just a few gentle slopes. It lasts about 1 – 2.5 hours and can be enjoyed at any time of day though we suggest you avoid the midday heat. A good time would be either early morning or in the evening after game viewing.